Visual trend lab f°am Studio has designed 7 autonomous vehicles in collaboration with IKEA future living lab – SPACE10. The project, called Spaces on Wheels, is a visual exploration of how fully autonomous vehicles could one day enable a more fulfilling, everyday life. Spaces on Wheels challenges the traditional idea of the car, leveraging lush design language and augmented reality to showcase how self-driving vehicles could support the very activities we spend the most time on – while moving us from A to B.

Award-winning visual trend lab and brand image consultancy f°am Studio is a tightly knit studio of unique and established directors represented by Friends Electric for commercial work in both the US and UK. Based in Berlin, f°am Studio works directly with brands to develop bespoke key visual design concepts and stories, shaping contemporary brand image culture that points far beyond the conventional themes.

SPACE10 collaborated closely with f°am Studio to define the visual language for what the next evolution of the automobile industry could look like. The outcome of the first exploration has resulted in 7 designs to trigger conversations, and reflect the potential future ecosystem of flexible, purpose-built spaces in the categories of Office, Cafe, Healthcare, Farm, Play, Hotel, and Shop.

f°am Studio explains their approach: “For us it was important to think holistically and globally about the concept of future mobility. To think what kind of potential we see for change for our cities, what kind of feeling of urbanity we want to see. What kind of society we envision and how the change can stem from the individual use and the subjective personal differences in how we see our private lives entangled with public life.”

Maintaining clean lines, rounded edges and modern forms that draw the eye, f°am Studio alchemized the ideas of a functional workspace and mobility in a way that highlights the attractive qualities of both. “We envisioned a design for the vehicles that is approachable, human-centered and welcoming,” says f°am Studio. “We wanted to reflect on the power of corporations in a post-political world vs the power of fluid collective ideas. And how it all manifests formally, changing the gap between urban and rural infrastructures, and shifting the powers in the real estate market drastically.”

“Therefore we arrived at a formal manifestation of that mobility that is a diverse, dynamic and pluralistic open system, a standard that is a platform on which individual expressions can unfold, and balance the power between people and corporations, as well as shift the urban design power from urban planners to individuals, businesses and city dweller collectives.”

f°am Studio spent two months developing the design personality of the prototypes from scratch, eschewing the go-to imagery of futuristic concept cars. Speaking of the deliberately human approach, Bas Van De Poel, Creative Strategist of SPACE10, says: “Google ‘car of the future’ and you’ll get a slew of images straight out of science fiction: sleek, sterile, chrome painted machines. We propose an alternative to this, because we believe that those who imagine the future often end up shaping it. This is our contribution to the conversation around the future of urban mobility. Autonomous vehicles shouldn’t, however, be seen as the silver bullet, far from, as we generally need cities that prioritise pedestrians, bikes and public transportation much higher.”

This would not only redefine how people and goods move around our cities, but also redefine the very fabric of our daily lives. To allow more people to envision a future ecosystem of self-driving electric vehicles that are available on demand and designed to accommodate diverse needs and lifestyles, SPACE10 and digital design studio Norgram added a feature in the SPACE10 app, where you can order and explore each of the 7 Spaces on Wheels direct from your phone via augmented reality.

Ultimately, Spaces on Wheels aims to help people envision a more fulfilling, everyday life on wheels through the power of design. In addition to the vast promises of what self-driving technologies could enable: from increased safety on roads, better health in cities, greater convenience, more efficiency, reduced environmental impact, the freedom of mobility for more people, SPACE10 aim to elicit a broader dialogue on how we should perceive and design these spaces. 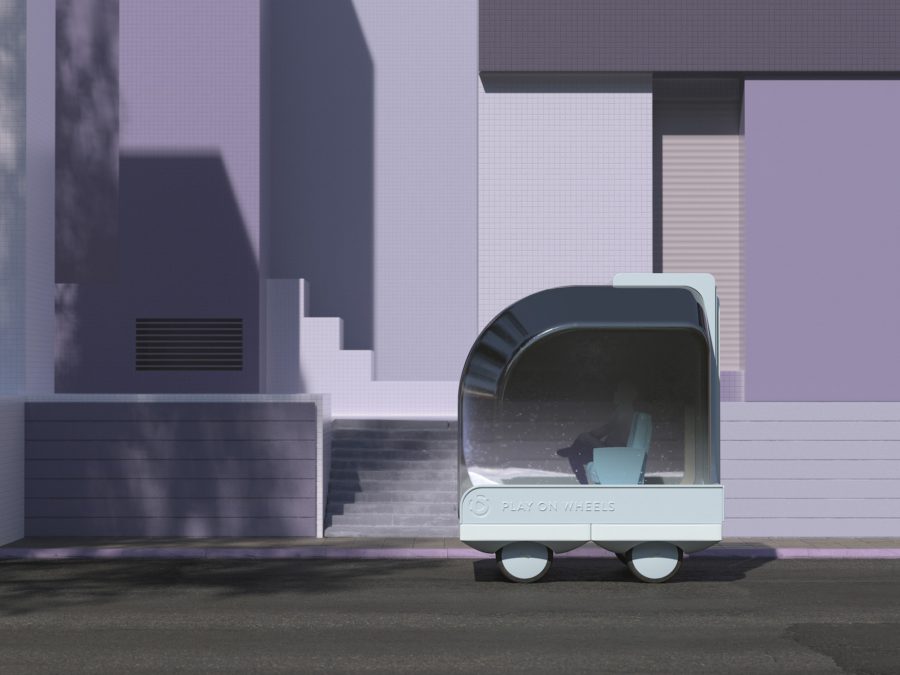 Spaces on Wheels is a project by SPACE10, in collaboration with f°am Studio and Norgram.

f°am Studio is represented by Friends Electric in the US and UK.

In congested cities, an average person driving to work spends 75 minutes commuting. About 30 of those minutes are lost to congestion. This means that over 32 years, the driver will have spent two years stuck in traffic. Office on Wheels, on the other hand, helps people reclaim some of that lost time—whether they want to get a head start on the day’s work to free up time for later or get an early meeting in with colleagues.

Cafe Coffee On The Go

Studies show that the quality of people’s relationships directly influences how happy they are. But in hectic, urban lives, people often have limited time to socialise; it’s also been found that the older people get, the less time they spend with friends. Enter Cafe on Wheels—a mobile space which enables people to catch up with a friend over a coffee when they need to keep moving on a busy day.

Transportation difficulties are one of the three major barriers curbing access to healthcare, especially for low-income communities. It’s known as ‘the last mile’ problem: health solutions tend to make it as far as medical outposts—but won’t reach end users. Healthcare on Wheels solves ‘the last mile’ problem by getting medical professionals to visit people in need, not the other way around.

Especially for people in low-income communities, difficulty getting to a store or market that sells fresh, healthy food is a significant barrier to local food access. In contrast, Farm on Wheels brings local food to people wherever they are, all while enabling local farmers to expand their businesses.

Augmented reality is set to revolutionise the gaming industry and become the next big educational platform. As the technology advances, it’ll increasingly play a role in autonomous vehicles by providing real-time content for the passenger that’s intimately tied to the vehicle’s surroundings. In Play on Wheels, augmented reality windows enable people to try a new game in AR as they travel, or experience educational content that responds to and reflects their surrounds.

More people are traveling than ever before. But air travel raises individual carbon footprints faster and higher than any other activity; in fact, the aviation sector is responsible for an estimated 4.9 percent of all human-made global warming. In contrast, Hotel on Wheels is an electric vehicle powered by clean energy which contains all the perks of a traditional hotel room. It takes people to their destinations while they’re getting their shut-eye and enables them to reduce their carbon footprints.

While brick and mortar stores enable retailers to connect with many people, some don’t live close enough to retail locations to go there that often. And although online shopping typically lets people buy, it doesn’t really let them shop—which is where Shop on Wheels comes in. Shop on Wheels will come to people wherever they are—letting them try, buy and explore on their own terms.