Alison was invited by fashion magazine Tinsel Tokyo to go behind the scenes with directing powerhouse Psyop for their Spring 2013 issue.  We learn about Psyop’s creative process, from when they first opened their doors (back when the studio was a converted bar – with the taps in tact) to becoming an international presence known for creating some of today’s most fearless content.

Not to mention they clean up pretty nicely! Check out their sharp looks and the interview below, or or read it online starting on page 126. 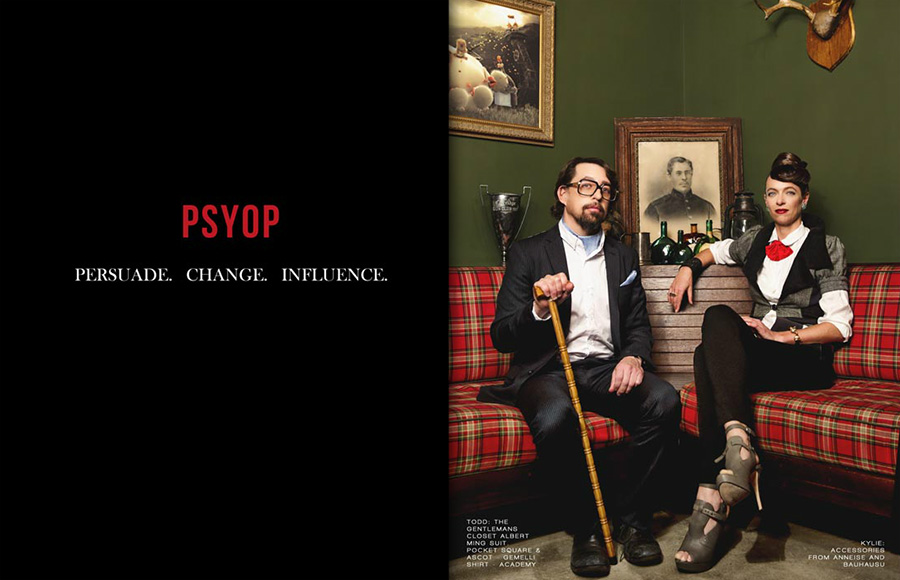 Director collective Psyop is known for making some of the most unimaginably edgy visual work out there today.  From their auspicious beginnings in NYC’s Lower East Side in the late nineties to their international presence today, Psyop has managed to match their creative collaboration, their work, and their growth as a business to create a brand that remains as authentic now as it did when they started.

Alison sat down with some of the Designers and Creative Directors in Psyop’s Venice Beach office to talk about their creative process, letting people do what they’re good at, and being fearless.

RACONTEUR: It must be pretty unusual to have all of you in one room. I’m assuming it doesn’t happen very often.

Laurent (Partner/Creative Director): We hate each other.

RACONTEUR: I want to take advantage of that by focusing on how you guys work together and your process.  But maybe to get a bit of context we should start at the beginning.  Can you go back and tell me about how it all started?

Todd (Founder/Creative Director): In 1999 we started in the living room of a friend in New York City on 14th Street and 1st Avenue. A bunch of us were working at MTV, Viacom, VH1, Nickelodeon and we decided it was time to start our own office.  There were five of us — we found a bar on 11th street between B and C and converted it to a studio. We kept the taps and kept the bar in place as long as possible. Everyone would be working on their computers and then go to the tap, draw a pint, and then go back to work.  That didn’t last too long!

Soon after we moved to a larger space in the Lower East Side on Rivington.  It used to be a Kosher wine warehouse back in the days of prohibition and there were these catacombs where they would hide the kosher wine. The original mural is still painted on the outside wall.  We built our first offices there and then five years ago, Laurent and Neysa found this great space on the West Coast and we opened up here.  That seems like yesterday.

RACONTEUR: How did that work when you had your initial team of five? Did you each have your own specialty, balancing each other with your skills?

Todd: My specialty was being an asshole.

Laurent: We all start with some specialties ‑ mine is live action but sometimes I do projects that are all animation. That’s what is great here – you can work on different types of jobs, and ask for help and get insight from others who are really good in other disciplines.

David: We generally work in pairs and match two people that compliment each other’s talents on a particular job, even from the pitch phase.

RACONTEUR: That’s interesting, because I was looking at the Twinings job and was thinking that one of the things that you guys are really great at is storytelling, and that even in Twinings with the gorgeous visuals the narrative really comes through.

Fletch: That’s what we aim for. We always want the story to grab the viewers, to make them want to watch and to evoke an emotional response.

Todd: You can see that in some of our older works — even as we’ve seen technology advance over the past thirteen years, if the story is strong the project holds up even if it looks dated the technology is dated.

RACONTEUR: So when an agency comes to you with a brief, do you find that you are known for that level of story?  Do they come to you specifically for that?

Fletch: While we want to tell a story, we also want to make sure the look and feel of a job is always different. It’s hard to think beyond your comfort zone and ask, “what really represents the job we’re working on,” or “is this something people have never seen before?”  But that’s what is exciting with the initial brief.

RACONTEUR: When you get a board in do you all sit together and pitch on it? How does that process work?

David: Usually the jobs are curated for specific people and then we go from there.   Half of us are directors and designers, so for example, I’ll design on some of one person’s job(s) and that person will help design on some of my things.  So even if we’re not explicitly director partners, most of us are going to be involved on any given project.

RACONTEUR: From the outside looking in you seem to have an appearance of being very close, working collaboratively together, and that must be a really hard balance to strike.  There are a lot of different kinds of people and companies that want to do that, but it doesn’t always work.

Laurent: Well, we’re all beautiful. So that helps!

Todd: One or two people need to be championing and steering the ship, but it’s an important element to the way we work to open up that creative ownership as much as possible.  And if you’re the Lead on a job – whether on a technical side or a storyteller’s side – then it is your job to whittle down those options.

David: It’s always best to let people do what they’re good at and let them figure it out for themselves, because they’re more than capable of doing that.  You have to release a certain amount of control, but it always works out for the best if you’re involving different perspectives on the same objective.

Todd: We’ve always found that working collaboratively was far more beneficial than being an isolated creative island. There’s something exhilarating when you work with other people and spread that creative ownership out.  Then the leadership is more about curating the ideas that are offered up.

RACONTEUR: As the Psyop brand, you are known as having this boutique, creative, hands-on feel that it seems like you’ve kept from your birth in the Village.  You’ve grown so much and yet you’ve managed to maintain that.  Do you think that part of it is the way you’re describing that you’ve been able to interact as you’ve grown or that you’ve kept true to that creative spirit?

Todd: I would like to think so.  I think what is traditional in our industry is to have a director who will come in, look at the work, and then when they’re done reviewing they go home.  Here it is very, very different. We’re all staff and we all spend forty plus hours working, talking, and if we’re not busy then, you know…

Todd: We’re always discussing ways to find an interesting angle on an idea. In our timeframe, though, you get one shot, so you have to vet your ideas on a conceptual level.

Fletch: And to bounce it off people who also think the same as you do means you can often visualize the end result without testing and time lost.

Kylie (Founder/Creative Director): When we started Psyop, the focus was that each project was creatively led and controlled, and that the creative visionaries and minds were really part of the entire process. A lot of decisions are made throughout the day, a lot of guidance is needed, and those conversations have a very positive outcome on the project.

David: And the detail is the most important part.

Kylie: We all come from a design background so we all have an eye for detail, and I think that experiencing the process together as a group is something we’ve held onto and also what allows people to be a little bit more experimental at Psyop.  Because everything is in-house we can define and how much time we can allocate on certain things and be a little bit more generous and take more risks.  That has always been a fun part of being a Director and Designer here — because we can come up with crazy ideas and we have a wonderful team that is totally into pushing themselves and seeing what they can do.

RACONTEUR: You mainly work in commercials, but do you also work on your own content? On short films, for example, or do you talk about developing features?

David: I’m trying right now to produce a short. I feel that making the time to work on our own projects is very important, but it gets hard when work is crazy busy and everyone is swamped.

Kylie: We’ve done a few purely creative projects in the earlier years when we had chunks of time in-between projects, but as you grow and get busier – more directors, more designers, more projects – we’ve found ourselves completely absorbed in our work.  But we have been making a focused effort toward thinking more broadly in terms of content development.

RACONTEUR: Can you mention some of your favorite jobs you’ve worked on, or agencies you’ve collaborated with, and why they’ve been your favorites?  Was it that they gave you free reign? Or did you have really specific agendas?

Kylie: A certain level of freedom is always nice, but we’ve had some great relationships with agency teams who are creatively amazing. And that collaboration, the conversations you have, are so wonderful that you don’t necessarily need that freedom. That’s always an exciting moment.  It’s so wonderful and inspiring to meet other creatives that bring something to the table.  And I would also say that the best creative projects happen out of a sense of fearlessness.  When you’ve got people in the agency who share that sense of fearlessness, it makes such a huge difference and I think having that it is really evident in the end result when that is part of the process.  When you’re fearless, you just focused on one thing — making something amazing and wanting to move people and create a message that’s exciting. It can be hard sometimes, but that’s where having a fearless team is so crucial.  It frees you up to create powerful work.